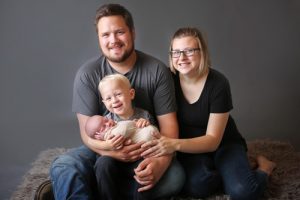 Your family is part of our family, and we want to welcome them into the pack! If you’ve recently added a new member to your family, we’d like to send you a complimentary Oak Hills Onesie.

Our thoughts and prayers are with the families of:

Nola (Schmidt) Standley ‘59
Nola graduated from Oak Hills Christian College. She moved to Princeton, Il at the age of 29 to become houseparent to 8-16 little boys at Covenant Children’s Home where she was a great influence for many years. Rob Mitchell wrote a book called Castaway Kid and told of her care in it. Nola passed away April 11, 2019.

Joyce Benston ‘47 and C’89
Joyce started her higher education by attending as part of the first class of Oak Hills Christian Training School, Bemidji, MN, in 1946, transferring to Moody after one year. Joyce joined Donna to serve as a missionary with Jim Schreiber at Oak Hills Fellowship in Bemidji, MN, teaching Know Your Bible classes, VBS sessions, camping, and other assorted ministries. She finally completed her bachelor’s degree in Biblical Studies and Intercultural Communications at Oak Hills Christian College during a furlough in 1989, forty three years after seeking that goal. She continued teaching Bible lessons at her senior citizens retirement home and participated in various positions at Northern Bible Church in Bemidji. She was also active in the Christian Women’s Club, serving as president one year. Joyce passed away May 9, 2019.

Donald Winters ‘62
After graduating from high school, Don began working as a bi-vocational pastor at the age of 19. Soon after he was drafted into the United States Army, where he served as a paratrooper. Following his service, Don attended Oak Hills Christian College and graduated in 1962. While there, he met and married Ruth Nelson. Don returned as a Development director in the early 1990s for five years. He was a world champion top spinner and traveled throughout North America performing and teaching. Don served the church in many roles throughout his life. He passed away on September 6, 2019.

George Klippenes ‘69
He gave his life to the Lord as a teenager and after graduating high school, headed to Oak Hills Bible School. It was there that he met the love of his life, Peggy Ferch. They were married June 8, 1968, and prepared for the mission field.  George and Peggy served in Ethiopia, Africa for two years before returning home to pastor in Minnesota. George pastored the Evangelical Free Churches in Stanchfield and Annandale, MN. George’s dream was to go into church planting when he retired. However, God used that dream, George’s deep love for Jesus and church planting to start him on that path earlier than retirement. George became the MN District Director of Church Planting and eventually the National Director for the Ev. Free Church.