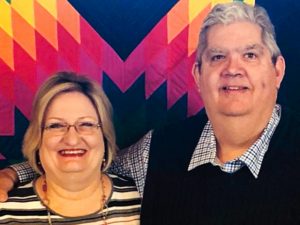 What a difference a year has made in the lives of Bill & Cindy Haas. This time last year, Bill was beginning his summer schedule of activities as Associate Director of Center for Indian Ministries and was making preparations for the start of a new school year at Mokahum Ministry Center. Their move to Bemidji a year prior was now in the rear-view mirror, and Bill was settling into a routine. Life was good.

Little did Bill know that in a few short weeks, the summer routine he had planned was going to be turned upside down, altered by medical issues that would leave the outlook for his life very much in jeopardy.

In July 2018, Bill suffered a significant stroke after surgery for a brain aneurysm. In the days that followed, the certainties of life that Bill so often took for granted became the luxuries he would have to set as his new goals. With significant damage to the left side of his body, he has spent months working with speech, physical, and occupational therapists as part of his long road to recovery.

While Bill may never fully return to the way things were before, he now celebrates the little things that life offers.“I’m truly blessed by each day,” he says. “The Lord isn’t done with me yet, and my passion for Him and for furthering His kingdom has only intensified since my surgeries. The outpouring of love and support for me and my family has been overwhelming. I have a lot to be thankful for!”

Bill has begun returning to his responsibilities at Mokahum as he is able. Please pray for Bill’s continued recovery, for the Lord’s provision of his family’s needs, and for Cindy and the family as they support him through this process.