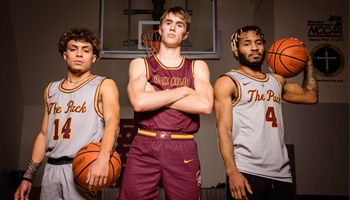 What a semester it has been for the Wolfpack. In looking at the record and the recent work for the Wolfpack one might assume that the team hasn’t been or isn’t going anywhere. With a strong emphasis on character improvement and spiritual development, the Wolfpack has been battling through a stout non-conference schedule. These non-conference games have battle-tested the team and when adversity hits the team is beginning to rally. In the second half of the final game of the semester, the team found themselves beginning to believe in one another and it led to a second-half lead of 12 points over the Waldorf Warriors. While this game got away from the Wolfpack the team took to heart the message of finishing the semester strong as they left nothing in the tank before the break. Once the team arrives back in January we look forward to getting into the heart of the team’s NIAC play and carrying all of the positive energy from the final two games of the semester. It’s been evident in these games that the tough non-conference schedule has helped to elevate the Wolfpack’s play which we hope brings dividends in a successful conference season.