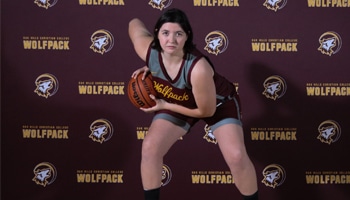 Plymouth MN – The Lady Wolfpack were on the road for the fourth game in a row, taking on conference opponent Free Lutheran Bible College. After dropping three straight, the team bounced back, finishing the Fall semester schedule with a bang. The women were inspired and motivated to get back to .500, and they began the contest with the intense defense which has been their identity this season. Several steals and solid rebounding propelled them to a first-quarter 28-11 lead and they never looked back.  The Wolfpack was able to outscore FLBC 23-0 in the second quarter and went to halftime with a commanding lead of 50-11. The final score of this contest was 85-35.

Coach Tucker – “We were able to jump out early on this team and I believe we gave good effort, there are always things that we can work on, mistakes were still made but we are growing and maturing all at the same time.  Being able to get to the .500 mark is good and a step in the right direction. I like our chances of competing in the second semester.”