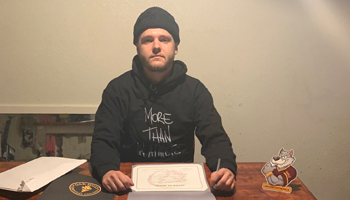 Bemidji, MN- Oak Hills Christian College is excited to announce that Jonathan “Jon” Nabors has signed his Letter of Intent to play basketball for the Wolfpack.   Nabors resides in Bridgeport, TX.  He is a 5’10” point guard who played his high school basketball at Chico High School (Chico, TX) for Coach Chad Woodard.  Nabors played for current OHCC Head Coach Dalton Miller at Dallas Christian College before rejoining him here at Oak Hills.

Oak Hills Christian College Men’s Basketball Coach, Dalton Miller, says, “It means a lot that Jon would move from Dallas to Bemidji.  He’s been with me for a year now and he’s a guy that would do whatever is asked of him.  He battled injuries last season but healthy he can really shoot the ball and I’m excited he’s part of the Pack.”

Nabors will major in Sports Management when he arrives on campus.  Jon states this as why he chose OHCC.  “Coach Miller reached out and it was no question.  I’m loyal to those who are loyal to me.”

Welcome to the Wolfpack Family Jon!  We’re excited you are joining our campus community.