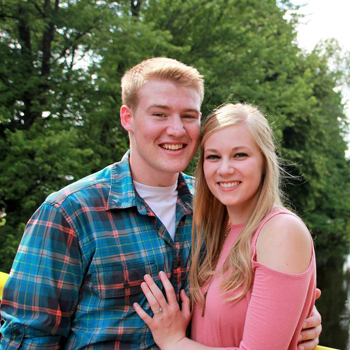 Written By: Hannah Olson and published in the Bemidji Pioneer on May 8th 2020

BEMIDJI — Clara Pearson has a lot on her plate this week. She is graduating from Oak Hills Christian College, navigating a job search, planning a move, and getting married on Monday.

Due to COVID-19, many of her plans have changed. She didn’t plan for her wedding to only include immediate family, or to be finishing up her associate’s degree online and graduating away from Bemidji. Regardless, 2020 will certainly be a memorable year, she said.

Pearson is originally from Clearlake, Wis., where she has been finishing up her studies since distance learning began. She chose Oak Hills after learning about it at a summer bible camp, and fell in love with its campus.

Her most memorable college experience was volunteering with the youth group at the Evangelical Covenant Church — coincidentally this is also where she met her fiance, Roman Konsella. He is also graduating with an associate’s degree from Oak Hills this spring.

Oak Hills has a course called Outreach, which requires students to get involved in community service. Through this, Pearson and Konsella both became active volunteers with their church youth group.

“(We) both were interested in working with the youth group at the Covenant Church, we would ride to Outreach together and that was kind of how we got to know each other,” she explained.

Pearson and Konsella are getting married sooner than anticipated — the date was originally set for late May — as they are both back in Wisconsin and can’t have a large gathering due to COVID-19.

“We decided to move it up because we’re already home and we don’t have to plan around 300 people anymore,” she explained. “It’s just going to be our two families. Life is easier but more complicated at the same time.”

The two plan to move near Eau Claire, Wisconsin after the wedding.

The proudest achievement of Pearson’s time at Oak Hills was working as a residential advisor, a position which she said helped her strengthen her leadership skills.

“I really began to feel comfortable in developing my leadership abilities and learning to communicate with others in an effective way,” Pearson explained.

Through reflecting on her time at Oak Hills, Pearson said she has learned a lot about herself.

“I learned that I really love learning,” she said. “It was really nice being able to incorporate the Bible into my classes, and just being able to see how we were able to connect the Bible with secular classes.”

She is disappointed about the lack of a commencement ceremony, she said, mostly because she won’t be able to gather with her friends and professors to say goodbyes.

Pearson is not yet sure if she wants to continue her education toward a bachelor’s degree or begin working, but is hoping to get the move and wedding out of the way before making her choice.

“I haven’t decided if I want to go back to school or not,” she said. “I guess we’ll kind and wait and see what happens after the wedding and after we get settled down and everything. We’re kind of just taking it one step at a time and trusting God’s process.”

In lieu of an in-person graduation ceremony, which was originally scheduled for this weekend, Oak Hills is celebrating its graduates with a keepsake video compilation including photos of each graduate, commencement speakers and videos detailing each graduates’ future plans.