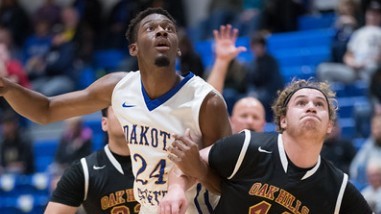 Currently in his junior year at the nondenominational Christian school near Bemidji, Minn., Jackson has one more year to claim the points leader title. Averaging 344 points a season, Jackson became Oak Hills first thousand-point scorer in five years when he ended this season with 1032 career points.

Oak Hills men’s basketball program has been going strong for 22 years and has only had a handful of players score over a thousand points. Head Coach Jeremy Anderson believes that Jackson could be the first player in school history to break the 1,500 mark. advertisement

“We don’t really get a plethora of thousand point scorers,” Anderson said. “Ronnie has scored over a thousand with one year left, so there is a real possibility that he could score over 1,500 by the end of his career.”

This marks the second time Jackson has scored a thousand points for a basketball program. Jackson, a high school standout for Seward, also managed to score over a thousand career points as a Seahawk.

Jackson’s nose for the ball and basket earned him a slot on the Alaska High School All-State Basketball Team in 2016, which added to his resume at a time when he was looking for a school to recruit him.

It wasn’t until Jackson was a junior in high school that he decided he wanted to play at the next level.

“Basketball had been a sport I excelled at,” Jackson said. “And during my junior year I found that my drive of being competitive and love for sports had inspired me to keep playing.”

During the recruiting process, Jackson had considered several school before landing on Oak Hills. Jackson’s father, Eric Jackson, aided Jackson by helping him put together game film and keep track of stats.

“It was up to him to gain interest from other school,” the elder Jackson said. “I told him I would help him with what I could, but it was ultimately up to him to find a school.”

Both Jacksons and Coach Anderson credited Seward and Oak Hills alumnus Michael Wolfe as a key influence in Ronnie Jackson’s choosing to play for Oak Hills. Wolfe reached out to Jackson and tipped off coach Anderson.

“His ability to shoot was one of the things we liked about him,” Anderson said recollecting the recruiting process. “He struck us as someone who can help us as a shooting guard and he had good character.”

As a freshman, Jackson wasted no time establishing himself as a scorer, putting up 364 points and finishing second on the team for scoring.

Jackson did more than just score for Oak Hills. He ended the season second for three-point percentage, second in rebounds, second in steals, third in assists and lead the team in free-throw percentage.

“I enjoyed the faster pace college offered,” Jackson said. “In high school you play with guys who are at mixed skill levels.

“But at the college level, we are all top competitors, so it’s been a fun challenge.”

Jackson’s success continued into his sophomore year, when he put up nearly identical numbers to his freshman year. He scored one less point than the previous year, but led the team in free throw percentage.

One factor Jackson jokingly credits for his success is his pre-game ritual.

“During my junior year (of high school) I would get my hair wet and then dry it off,” Jackson said. “I know it’s kind of weird, but there’s something about a hair shower that just calms me down and be ready to play.”

During his junior year of college, Jackson led the team in minutes played, three-point percentage and free-throw percentage. There was a slight decline in other statistics, but nonetheless Ronnie stayed on-course to become the highest scoring player at Oak Hills, scoring 305 points.

“People learned really fast that he can shoot.” Anderson said. “Sometimes you have guys who come play for a year or two then leave or transfer, making it hard for schools to get a read on them, but since Jackson has stuck around the other coaches see him and know what they need to do to slow him down.”

“One adjustment he had to make was his release time and creating space to get open, which I think he has done quite well.” Anderson added.

Jackson’s work ethic outside of practice and in the classroom has been praised by coaches and former teachers. From making sure he meets deadlines for assignments, to nagging high school coaches to open the gym, to shooting hoops in the back yard with a young Connor Spanos, Jackson has worked tirelessly to achieve his career and athletic goals.

Another factor Jackson has accredited to his success is the advice from previous coaches and parents – both in basketball and in life.

“I still text Coach Plan for advice about games and how I can improve my game,” Jackson said of Seward Athletic Director Al Plan.

Currently, Jackson is on track to graduate next spring with a bachelor’s degree in sports management and plans to return to Alaska after graduation to seek work.

“Give it two years, and I will have Coach Plan’s job,” Jackson joked. “My goal is to become an athletic director and work to develop new athletes.

“I’m so thankful to have gotten to play at the college level and I feel I’ve accomplished everything I’ve ever wanted to in basketball as a player. So I think the next step is to coach.”