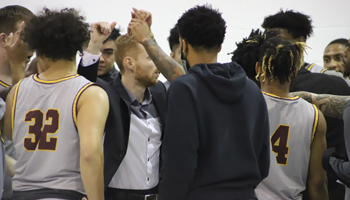 Oak Hills Christian College – Men’s Basketball faced off tonight on the road at NAIA opponent Mount Marty University. Mount Marty, a Member of the GPAC, were looking to open their season up with a win but the Wolfpack had other plans. The game started slow for the Wolfpack as they were down 11-1 right out of the gate, but they would settle in and slowly chip away at the Lancers’ early lead. The game was back and forth for most of the first half and The Pack took a 41-39 point lead into the break.

Out of the break, the Lancers looked to take control. The game went back and forth for most of the half however, late in the second the Lancers opened up their largest lead of the game to 13 points. Once again, The Pack was forced to have a comeback game, and this time, they would complete it. The Lancers went on a big run late taking an 81-69 lead with 3:15 left to play in the game. After a late time-out from Head Coach Dalton Miller, The Pack held the Lancers scoreless for the rest of the game. Immediately following the time-out, Doug Merida hit a quick three, cutting the lead to just nine (81-72). In the following possession, Alante Coward was fouled while making a basket. The Lancers then led 81-74 with Coward at the line. Sophomore Devin Session chased down the miss and he was sent to the line as well, making both foul shots and cut the lead to just five, 81-76 with 2:00 left in regulation. Senior transfer DJ Johnson attacked the rim and finished, putting The Pack 3 points behind the Lancers, 81-78 with just 1:00 to play. With 27 seconds left to play, Session grabbed a board under the basket and finished, cutting the lead to one point, 81-80 in favor of the Lancers. On the ensuing inbound, The Wolfpack were looking to get a steal or foul to stop the clock, Johnson got a huge steal and was fouled, shooting a 1 and 1 for a chance to take the lead, which they did. The Pack finished the game with a stop and a huge defensive board from transfer Matthew Richmond, and they finished the game with an 82-81 victory over the Mount Marty University Lancers.

“We showed toughness. The adversity didn’t break us down. It brought us together and in every time-out, I continued to tell the team we were going to win this game and they truly believed they would. I look forward to battling with this team all season long.”, said Coach Miller.

Tonight’s stat leaders were #10 Merida with 24pts, 5rbs, and 3stls. #23 Johnson followed with 23pts, 5rbs, and 3stls. #5 Coward had 16pts and 5rbs and 1 charge taken. #32 Session had 15pts and 9rbs, and #11 Richmond chipped in with 7rbs including the rebound at the end of the game to seal it. The Wolfpack will stay in Yankton as they take on Mount Marty once again tomorrow with a noon tip-off.