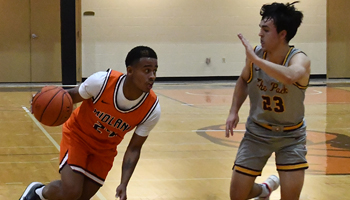 The Oak Hills Men’s Basketball Squad headed to Fremont, Nebraska for the start of the three-headed monster on Friday, October 15, and got a taste of some stiff college basketball competition. The game at Midland University started out neck and neck, with both teams scoring back and forth early. Mark Mattiex started the season off with an easy deuce into the lane. The Wolfpack were led by starters Tray Anderson, Quincy Wilson, Nash Chaney, Mark Mattiex, and Jex Nwalor. Bursting to an early 9 point lead, the Wolfpack hit tough shot after tough shot to extend the lead, until Midland’s physical presence and shooting ability took the Warriors on an 18- point run to respond to our early lead. Tray Anderson went to the bench at the 10-minute mark with foul trouble, and a blend of newcomers and returners Culan Hendricks, Austin Pacheco, Jerome Hartman, Jon Nabors, and Cody Blomberg, Corion Pritchett added some much-needed depth and spark to keep the Wolfpack in the game. At the half, the Wolfpack went into the locker room only trailing by 6, 41-35. Out of the gate of the second half, Midland began using their size advantage to attack the basket with much more aggression. A hard-fought match up until the 13-minute mark, Midland pulled away after getting back to back to back stops and converting on the offensive end. The Wolfpack were also outmanned on the boards and the Midland Warriors cruised to victory running away with it in the middle of the second half, the final 89-61. Tray Anderson and Mark Mattiex tapped in 15 pts each, while Quincy added 11 pts and Jex added 5 pts and 11 boards.

The second matchup with the Midland Warriors on Saturday, October 16, 2021, was much of the same of the second half of the first matchup. The Warriors outmanned the Wolfpack on the boards and hit all the shots they missed on Friday night to sweep the Wolfpack in the doubleheader series before heading to Aberdeen for a head-to-head against Presentation. Tray Anderson had himself a night despite team scoring woes, dropping in 26 points going (9-16) from the field. Quincy Wilson added 11 points and 3 dimes in the loss.

Sunday’s game against Presentation was the highlight of the tripleheader weekend. The Wolfpack headed back home from Fremont, Nebraska and stopped in Aberdeen, South Dakota on the way back for a friendly matchup against two teams hungry for their first win of the season. The game started with many lead changes. Culan Hendricks made an appearance into the lineup to help generate more flow in the Wolfpack offense. Jex Nwalor started the Wolfpack off with a step-back three to put us on the board early. It was only a matter of time until the ball got moving and the offense started rolling. Quincy Wilson tacked in a couple of drives, including a pair of And 1 plays. Tray Anderson showed the Presentation defense early that they would have to track and cover him running off of those staggers and ball screens. Once Tray began heating up, here comes Nash Chaney with a highlight play from deep, and Mark Mattiex with a really solid half of finding his spots and getting into his jump shot. The WolfPack made a few runs and Presentation weathered the storm through our shot-making ability – heading into the half only trailing by 4, 39-35.

The second half begins and Presentation found some shooting from their guard play after a terrible three-point shooting stint in the first half, and the Wolfpack gave up a 6-0 run to a few three-pointers that put the Saints up 10 early. Another quick 9-0 run from stops and missed scoring opportunities on our part, and we were battling down by as much as 23 points with 8 minutes left to go in the second half. Fatigue and depth were beginning to wear down on the Wolfpack, but the Wolfpack were not done. To the pressing ranks, they went, and we were able to generate some turnovers and convert on a few of those plays. It was all too little too late, and the Wolfpack end the game 93-82. Mark Mattiex, Quincy Wilson, and Tray Anderson each combined for 73 points, Mark chipping in 31, Quincy with 16, and Tray with 26. The Wolfpack had left Aberdeen with their pride and dignity as they now understood the urgency and intensity of high-level college basketball. Coach Flemming had nothing but positives to take away from the weekend, “Sure we made mistakes, we took our lumps early. But we were getting back on that bus to head home even hungrier. I knew that what we had seen that weekend was what we needed to see as a team in order to reorder our focus and energy. I could feel the guys knew it was time to go back to the grind and correct our mistakes and begin promoting those good habits we wanted to become second nature for our guys. We definitely didn’t know who we were coming into this weekend, but after taking our lumps early, we are getting closer and closer every day to forging our new identity and culture. This team is going to score, and we are gonna play hard- but if we play together consistently and focus on defense and rebounding with more intention, we will be tough to beat. I am excited to see how we grow as a unit moving forward.”