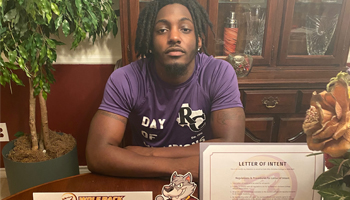 Bemidji, MN- Oak Hills Christian College is excited to announce that George “Douglas” Merida II has signed his Letter of Intent to play basketball for the Wolfpack.  Merida II resides in Dallas, TX.  He is a 5’10” guard who played his high school basketball at Duncanville High School (Duncanville, TX) for Coach Corey Chism, Coach Cole, and Coach Johnson.  Merida II is a transfer from Ranger College.  Doug played AAU basketball for the Dallas Pacers.  He was 1st Team All-District and 1st Team all Defense his senior year.

Merida II will major in Business when he arrives on campus.  Doug states this as why he chose OHCC.  “They made it feel like home even without basketball.  I can tell they care about me as a person.”

Welcome to the Wolfpack family Doug!  We’re excited you are joining our community.