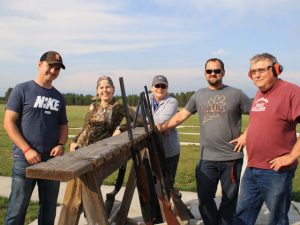 Women’s Volleyball
Coach Charlotte Snowden came to OHCC in the fall of 2017 and launched the women’s volleyball program, and has plans to launch the women’s basketball team this fall. She desires to develop women’s athletic programs here that will be competitive and honor God. She hails from the Ozarks as a native of  Missouri and graduated from Central Bible College with a BA in Christian Education. Throughout the next decade, she worked in private schools in elementary and secondary physical education while also coaching. In 1994, she started coaching college women in both volleyball and basketball at Southeastern College. Through the years since, she has coached for several colleges and even spent a year coaching and teaching in Israel. Along the way she obtained a Master’s of Science in Sports Coaching. She has a strong calling to coach and mentor young women both on and off the court. It was that strong calling that led her here to Oak Hills.

Intramural Trap Shooting
Oak Hills Christian College introduced trap shooting as  a new intramural sport this year coached by Brad DeJager. Throughout the season, 11 shooters (8 students and 3 staff) went weekly to the Northland Regional Shooting Sports Park. Trap Shooting has recently become one of the most popular sports in the country, and Bemidji is the perfect location to take advantage of the interest. If our students remain interested in Trap Shooting, we will be looking at making it one of our competitive intercollegiate sports.