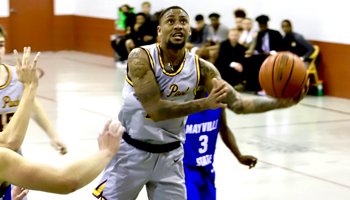 Oak Hills Christian College – Men’s Basketball opened up their regular season of the 20-21 campaign at Home on Tuesday night Oct. 27 against NAIA opponent Mayville State University. The Wolfpack trailed early but managed to keep the Comets from getting out past a 15-point lead, that is until late in the first half. The Wolfpack would be kept in the game by Doug Merida’s 16 first-half points however, late in the half the Comets pulled out to a 20-point lead and went into the locker room with a 22-point lead.

Coming out of the break the Comets would push their lead up to as high as 25 points with just under 18:00 left to play. From there, it was all about The Pack. Alante Coward entered the game off the bench and would score the first 5 points of the half. Defensively, The Pack turned it on forcing the Comets to turn the ball over 15 times which lead to fast breakpoints and a momentum shift. The Pack did not shoot the ball as well as they’d have liked but would get huge threes from both Matthew Richmond and DJ Johnson that helped cut into the Comet’s lead. After battling back the entire night, The Pack cut the lead to 9 and got it to 10 two other times. First-year head coach Dalton Miller was extremely proud of his team’s fight, saying, “Down 22 at the half you never know how a team will respond, and we could’ve given up. The outcome could have been a lot different. Then you get down 25 and you just don’t know what to expect from a brand-new group, but these guys never stopped coming. They proved time and time again in that second half they were going to compete regardless. Alante (Coward) gave us a huge boost in the second half, Doug (Merida) did his thing and those two just find ways to put the ball in the hole. I believe we’re a good shooting team so it’s frustrating that shots weren’t falling and we made mistakes we obviously need to clean up. But our Bench was in it all night, it took all 20 members to get back into that game and I’m excited to see this team grow moving forward.”

The Wolfpack scoring leaders were #10 Merida (27 pts), #5 Coward (17 pts), #23 Johnson (16pts). Johnson and Nwalor each chipped in on the boards grabbing 5 apiece, and Merdia snagged 4 steals to lead the way defensively for The Pack. As a team they were 5-30 from 3PT range but will look to bounce back from their shooting struggles on Friday night as they head down to Yankton, SD to take on another NAIA opponent, the Mount Marty University Lancers.