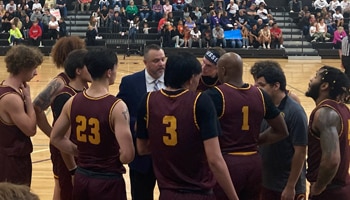 Forest City, IA- The Wolfpack opened up their 2022-23 season by traveling to Forest City, Iowa to take on Waldorf University.  The Wolfpack got down early and struggled to get the shots to fall and went into the half trailing 52-35.  The sharpshooting Warriors shot 55% from the field and 43% from the three-point line.  The second half of the game was a lot like the first half as the Wolfpack and the Warriors traded baskets for much of the second half with the Pack eventually running out of gas and coming up on the losing end 100-70.  The Wolfpack were led in scoring by Deontray Anderson (Sr, Desoto, TX) and Quincy Wilson (Jr, Bemidji, MN) with 16 each followed by Bryson Keepers (Fr, Sheldon, WI) with 14.  Keepers led the Wolfpack in rebounds with 6.  Anderson and Nash Chaney (Jr, Las Vegas, NV) each had 2 steals for the Pack.  Chaney and Jerome Hartman (Sr, Prosper, TX) each had 3 assists to lead the Wolfpack.  The men are back in action next Sunday as they take on Vermilion Community College at home.  The tipoff is slated for 4:00 PM.