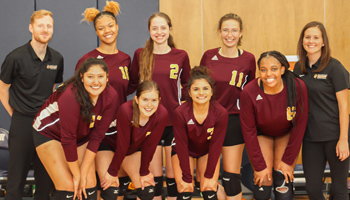 Women’s Volleyball – The Wolfpack finished up their second weekend on the road down in Manhattan, KS this past Saturday, September 12. Coming off of three straight losses in Ankeny, Iowa they looked to bounce back quickly with the opportunity to play back-to-back against the home team Manhattan Christian College Thunder, and the Spurgeon College Knights. The Pack did not start off well against the Thunder as they quickly fell behind 2 sets to none before showing signs of life in set 3. After making some major lineup adjustments, the Pack came out ready to compete and not give up the 3rd set in the manner they did the first two. Head coach Dalton Miller commented that “We just did not have the effort in the first two sets, but after getting down 10-3 in the third set we found a stride and made a push to take one from them. Competing is something we talk about every day and when we do compete, we can be a very tough team, so we have to bring everything we have every time we touch the floor.” The Thunder would also go on to win later in the day against Spurgeon and now sit at 3-0 on their season.

The second game of the day which immediately followed the first game was against the Spurgeon College Knights. The Pack came together and won three straight sets all with a score of 25-20. “We looked a lot more comfortable in game 2. We went to a two setter look and Rachel (De Campos) really found a rhythm with her sets, Tania (Gladney) and Arianna (Lee) did a great job reading the floor and putting the ball down. To lose 3-0 against a very good Thunder team you never know how your team will respond, but we put it behind us and took the momentum from our 3rd set against Manhattan into our game against Spurgeon and we were in control the entire time. I was very proud of their response and now we have to move forward and prepare for next week” said Coach Miller regarding the team’s efforts in game 2. As mentioned, Rachel De Campos led the way with assists (23 assists), connecting mostly with Tania Gladney (12 Kills), and Arianna Lee (8 Kills). The Pack also had 45 total digs as a team with Gladney leading the way (14 digs), De Campos (9 digs), and defensive specialist Alexis Bowland (8 digs). The Pack also picked up some huge momentum serving with Anaya Whitt (4 Aces), and Lee (3 Aces). The Wolfpack will head to Mankato, MN on Monday, September 21 for a couple of exhibition matchups. Those will be much needed moving into the first home weekend of the season against regional opponent Trinity Bible College. The Wolfpack dropped the first match against Trinity in the 5th set, but will be much improved and ready to take the floor in front of the Oak Hills community. 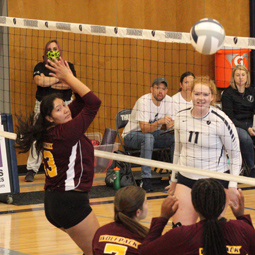 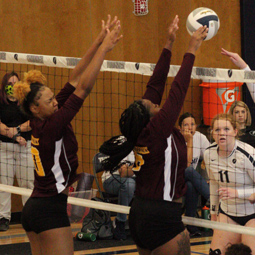 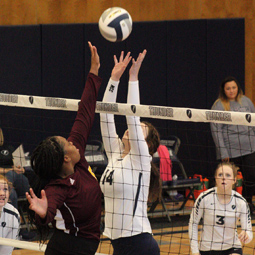 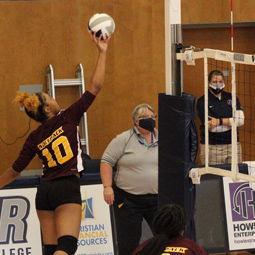