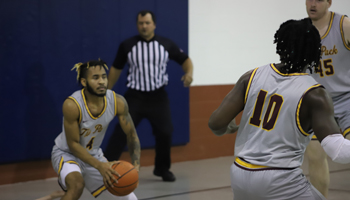 Oak Hills Christian College – Men’s Basketball went head-to-head in their second matchup against the Mayville State University Comets this season. This is also the second game of the season for the Comets. Mayville State took game one 91-78 in Bemidji. This time, the Wolfpack were on the road in Mayville, ND.

Mayville State took the first 5 points in the game, but the Wolfpack was able to recover by taking the next 4. From that point on, both teams started to settle in. With 13:00 left in the first half, the score was 12-14 with the Comets holding the lead. After a run by the Comets, the lead ballooned to 13-21 with 11:00 remaining. The lead got to double digits with 9:00 remaining with the score at 15-25. After a few empty possessions, turnovers, and fouls by the Wolfpack, the lead was 17-33 with the Comets in the bonus. After 4 more minutes, the Wolfpack finally got into the bonus and made both free throws. With 3:29 left in the half, the score was 27-43 having the Wolfpack trailing.

Halftime. Mayville State 57, Oak Hills 29. A discouraged Wolfpack headed to the locker room. The team didn’t come out with the same tenacity we have come to know so far from the Pack.

In the 2nd Half, the Wolfpack came out stronger than they did in the first half. The teams went back-and-forth scoring and getting stops. With 13:31 remaining in the 2nd, the score was 42-66. After a few possessions by the Wolfpack trying to force a few shots, the Comets regained control going up 42-75 with 11:00 on the clock. After the next few minutes of trading possessions, the score was 53-82 with 8:05 left. The trend continued with 3:42 on the clock and the score at 62-92. Final score, 73-103.