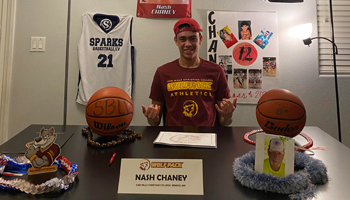 Bemidji, MN- Oak Hills Christian College is excited to announce that Nash Chaney has signed his Letter of Intent to play basketball for the Wolfpack.  Chaney resides in Las Vegas, NV but his hometown is Wailuku, Hawaii.  He is a 6’1” combo guard who played his last two years at Liberty High School (Las Vegas, NV) for Coaches Stefan Berg, Chad Frenzel, and Michael Chaney.  Chaney plays his club basketball for Sparks Basketball Las Vegas where his team has won several tournaments including the Jam on It Tournament in Vegas.  His coach had this to say about Nash. “He works hard when the coaches are watching but even harder when they are not.  That’s the key to becoming a better player on the court and in life.”

Chaney will major in Sports Management when he arrives on campus.  He states this when asked why he chose OHCC.  “I like the family vibe given and I have a great interest in learning more about God.”

Welcome to the Wolfpack Family Nash!  We’re excited you are joining our campus community.