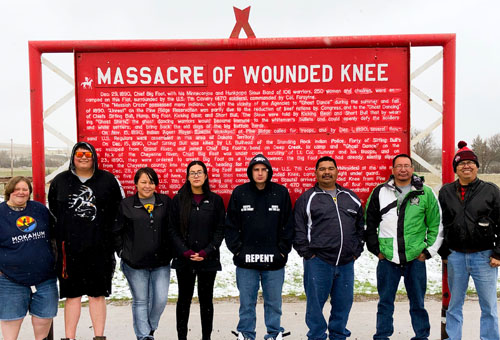 When the leaders of Oak Hills Center for Indian Ministries were considering where to kick off the new BUILD (Biblical United Indigenous Leadership Development) program—bringing Mokahum-style biblical training directly to reservations—Pine Ridge is where the Lord directed their attention. In a meeting with Lakota pastors, one said, “Our people are being evangelized over and over, but what we really need is discipleship so we can disciple our own people.”

In its first year, the BUILD program hosted eight week-long modular courses on location in Pine Ridge. Attendance has ranged from about 15 to 40, with a consistent core group of believers who are hungry to study God’s Word in depth and to learn everything they can about being disciples of Jesus.

In April, seven Mokahum students—two of whom are Lakota—traveled to Pine Ridge with CIM Director Paul Straubel to join the BUILD students for their last class of the year. Taught by Navajo Pastor Daron Butler, the class focused on God’s plan to reach the nations. It was an energizing time as the students heard how Native American people are moving from being a mission field to a mission force, used by God to reach the nations.

During this trip, they met at the Wounded Knee memorial for a powerful time of prayer. In 1890, some 250 Lakota Sioux were massacred by U.S. Army soldiers at Wounded Knee, located on the Pine Ridge reservation in southwestern South Dakota. Today, a sign at the site of the massacre remembers the men, women, and children whose lives were needlessly taken on that day long ago.

But for many Native American people the wounds are still fresh, an ongoing source of grief and anger, far more than just a story from the past. Acknowledging the painful history represented by the big red sign, they committed together to write a new story, the story of a redeemed people prepared to bring the hope of Christ to the world. After a summer break, the BUILD program will resume in August. Plans are to host eight more classes throughout the school year, culminating with a graduation ceremony for those who complete the program.

Pray for these Lakota followers of Christ as they seek to no longer be defined by their tragic history, but to become leaders for their people and to make a difference in the world.